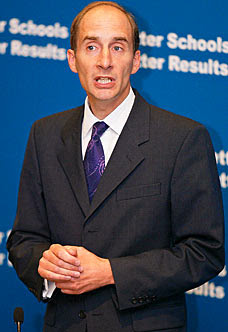 UK government minister Andrew Adonis telling yet more British government lies
Despite assurances that all images of all people going through all body scanners at British airports would be instantly destroyed in all cases, it seems the 'girls' of Hounslow and Slough who man these machines have been recording and passing out copies of near-naked pictures of Indian movie celebrities to each other, for their own titillation.

No doubt all those involved at Heathrow will be sacked immediately.

Go on, you actually thought the British state might actually be telling the truth for once, about these scanners, didn't you?

No doubt when they tell you that the repeated doses of ionising radiation that these machines bathe your body with is also safe, you'll believe that too. And when skin carcinoma rates start growing, as these scanners are rolled out, this will no doubt be blamed on 'global warming' and 'capitalism'.

Unfortunately, as is shown quite clearly by the above story, the British state never tells the truth about anything. Except occasionally by accident, through its own systematic and ever-increasing incompetence.
Posted by Jack Maturin at 1:43 pm