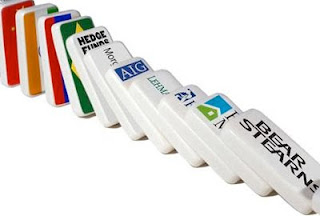 I think even Uncle Gary might have been out-"Uncle-Garried" by this spectacular all-encompassing article, by Andrew Gavin Marshall, which covers the history of the western world from about 1965 onwards and contains more about the Bilderberg Group and the Trilateral Commission than even Uncle Murray was ever prepared to contemplate.

The people have been lulled into a false sense of safety under the rouse of a perceived “economic recovery.” Unfortunately, what the majority of people think does not make it so, especially when the people making the key decisions think and act to the contrary. The sovereign debt crises that have been unfolding in the past couple years and more recently in Greece, are canaries in the coal mine for the rest of Western “civilization.” The crisis threatens to spread to Spain, Portugal and Ireland; like dominoes, one country after another will collapse into a debt and currency crisis, all the way to America.

Lordy!
Posted by Jack Maturin at 7:28 am