Ali Dizaei, a 'criminal in uniform’, jailed for corruption 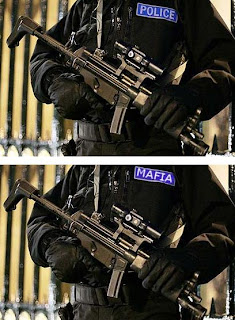 As the former senior policeman in Henley On Thames, Ali Dizaei always had a good name around these parts. It all started to go horribly wrong for his reputation when he left for London, to join the Metropolitan Police, where he shot up the slippery pole, eventually becoming a 'Commander' (whatever one of those is), despite constant involvement with court cases attacking his record.

No doubt in the current court case he has once again been 'suspended' on full pay, and this second court case has so far cost £8 million pounds. Dizaei will almost certainly appeal against this, and let's just assume that this appeal will cost the rest of us another £2 million in taxes. (I predict that he will win the appeal, and once again the Met will have to apologise to him and no doubt promote him again.)

Even if he loses the appeal, let's then add on the £1 million pound pension pot Dizaei is still entitled to, after 24 years in the police (approximately £40,000 per annum, just for his pension), and you are looking at one expensive policeman.

But how much real 'work' have we had out of him? Since leaving Henley he has spent much of his time 'suspended' and much of the rest of the time embroiled in expensive court cases, although being continually promoted throughout the entire period, despite presumably doing not much in the way of preventing physical crimes against person and property (the only crimes taxpayers are really interested in the police preventing).

We're probably up to about £15 million pounds in costs so far, for this one man, and counting, for very little security provision in return.

Now you may say that 'justice' has no price. But let's just compare that to what a private police force would have done, in the sane society of 'Maturin World' using natural law rather than fiat law. They would have paid a decent young man a decent wage, of let's say 50 (untaxed) gold ounces a year, had him out on the streets for at least 80% of the time preventing crimes against property, and at the first substantiated sniff of impropriety sacked him (whether he was technically guilty or not) just to keep the name of their security service in good order, with perhaps a no-blame no-publicity payoff payment of another 50 gold ounces, to keep the story out of the newspapers. (Remember, in 'Maturin World', there are no 'rights' to a job - if your employer decides they don't like your face and they want to sack you, that's it, game over.)

This private policeman would have been much cheaper and much more effective. He would probably also have been much happier within himself, spending his time doing something his customers valued rather than spending most of his time behind a desk. The insurance customers paying his wages would also be much happier, regularly seeing him walking around their properties with a gun and a flashlight, looking for miscreants, rather than embroiled in endless statist paperwork or lawyer-subsidising pointless statist court cases.

The British police will continue to become more expensive and more ineffective as time progresses, due to their monopoly of security provision. It has reached a point now where natural-law-abiding people like me are more afraid of police than we are of private criminals and where any entanglement of any kind with the police is usually expensive, is sometimes threatening, and is always unpleasant. They are becoming hated by the people who are forced to pay their wages and whom they are supposed to be protecting. In response, they are becoming ever-more aggressive and seem to spend most of their time trying to think of new ways to steal even more money from us, in the ways of fines and other 'violations' of stupid victimless state fiat laws.

Personally, I am absolutely certain that at some point these goons will have me banged up for some stupid 'infraction' or other (e.g. not carrying an ID card or walking on a crack in a pavement), and that it is only a matter of time before this happens. Although the one silver lining to this belief is that as they become ever more hide-bound with pointless expensive bureaucracy, I may slip through the net of their increasing incompetence.

I think I've said it before, but it may be worth repeating again. I would actually feel safer if there were no British public police. We would then be able to arm ourselves to protect our property, and the money saved on taxation would be put to much more effective use hiring private security agencies and we wouldn't then be under the constant threat and harassment of the public police, the armed wing of the inland revenue.

If you don't agree, ask yourself if people prefer shopping in private malls guarded by private police rather than shopping in 'public' streets supposedly guarded by non-existent public police (who are all 'busy' in police stations filling out forms in triplicate on traffic offences). The answer to that particular question tells its own story.
Posted by Jack Maturin at 8:05 am