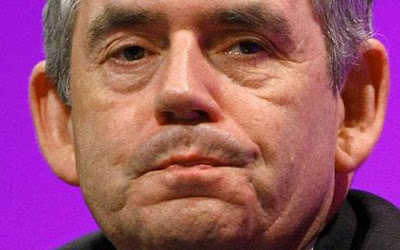 Gordon Brown is today going to announce “Greater Fairness” for all, “A Crackdown” on City corruption, and “More Free Nappies” for teenage mothers.

Well, I might have lied about that last one, but honestly, would it have made any difference if I hadn’t?

Just what exactly is the point of Gordon Brown? Everyone knows he’s finished, except apparently himself. Yes, I suppose he can be used by all the other cowards in the current Cabinet to take the blame for the impending wipe-out of the Labour Party, as they stagger into an economic depression (none of which is their fault, you understand, oh no). But what exactly will be the point of taking over a political party, in 2010, which has just 67 M.P.s?

Scotland will be almost entirely Scottish Nationalist, and will then secede to create a free Scotland, the Liberal Democrats will become the second largest party in England, Wales will become a total irrelevance to “British” politics and will then (hopefully) march quickly towards secession, and the Tories will remain in power in England for about 15 years, before total corruption wipes them out again, despite being led by a wildly popular Prime Minister, Bonson Jorris (shades of Churchill).

So what’s the point Jack Straw, David Miliband, et al, of hanging on for after the election? Be brave, for God’s sake, and give us something interesting to watch on the telly, while we wait for the phone to ring with a meagre offer of work.

I suppose that a “North of England” secession might become the point of the Labour Party, seeing as it will be entirely concentrated in the northern conurbations, but then who will they sponge off? Yes, the party of my youth, the Labour Party, is certainly living in interesting times.

But then, aren’t we all?

UPDATE: Well, he failed to promise free nappies for anyone, but he did promise "free" drugs for cancer victims (paid for, obviously, by yours truly). Obviously they'll be a lot more cancer victims about, now that the appallingly named government agency, NICE, has banned the NHS from using the latest and most effective cancer treatments, on the grounds of cost, but that's me just being picky. Rather predictably, the BBC is rounding up all of its usual socialist idiots and Daily Mirror journalists to tell us what a marvellous rejuvenating speech it was. Apparently, it now gives Brown the "strength" to carry on until at least next June. Really? Only if the Tories can string it out that long by failing to EVER criticize him, I suppose. In the end though, who cares? He'll only be replaced by another taxing, regulating, self-obsessed and self-serving politico, who will just promise a different group of voters that they can have free access to my wallet. But seeing as I have a lot more free time on my hands, at the moment, than I would wish, if he makes it to the end of next week I'll be surprised; to Christmas, I'll be flabbergasted; to next June, well... they do all seem to be dragged out of Downing Street kicking and screaming. But what kind of state will the man be in by then? I am ALMOST starting to feel pity for him. Almost. But not quite. Maturin comment on speech: Same old codswallop drenched in emotional vinegar and deep-friend in envy. Pathetic. Was this really the best you could do, Gordon? No wonder Tony Blair laughed at you behind your back, so much, for all of those years.
Posted by Jack Maturin at 11:21 am No comments:

And so it would appear that Badger Darling, is willing to do anything to keep the British government’s financial system afloat. Anything, that is, except cut government spending. Yes, he’s perfectly willing to “borrow” another £100 billion pounds in my name, all of which will come out of thin air, thus ramping us further towards hyperinflation and inevitably higher delayed taxation. However, the several million masturbatory Stasi on the government’s salary rosters will still remain a'bed, occasionally flexing their weary Mafiosi muscles to police the British government’s unending regulations controlling every aspect of our lives.

And so the rotten criminality at the heart of this system, the ability of the Bank of England – and the fractional reserve banking system it manages – to create counterfeit money out of thin air, will continue apace; unchecked, unbalanced, and without the merest sign of criticism. Indeed, it remains essential; otherwise the open market division within the Bank of England will be unable to pump up the currency enough to generate the £100 billion needed by Darling to keep his Stasi soldiers fed with their ill-gotten rations.

Thus, the great confusion of money, that it is a source of wealth in itself rather than a medium of exchange, will be used to fool the public once again to continue supporting these Whitehall clowns.

Instead of the price system thus being allowed to give us one necessary year of pain, for it to correct the dreadful economic malinvestments driven by a decade of endless counterfeiting to keep Brown’s Boom going, we will cheerfully enter a decade of stagflation and increasing socialism – Brown’s Bust – probably ending in the deaths of millions in some dreadful utterly unnecessary war. The price politicians will pay in our lives and in our livelihoods to keep the great fiction going of the necessity of the central banking monetary system is quite simply unpardonable. If I believed in a hell, I would wish them all to burn in it for their hubristic sins.

What’s even more frightening is that the fool Darling appears to have no clue as to how any of this works. Does anybody in the government, politician or bureaucrat, know what’s going on? One suspects not. Even as they buy up old government bonds with counterfeit cash to keep this monster going, under the illusion that what they are doing so surreptitiously is a good thing, I really am coming to believe that they have absolutely no idea as to the consequences of their actions and that they are merely reacting to events, at all times, with their internal mantra holding that whatever is good for the government in the short term is good for everyone else in the long term, no matter what lies they tell us in the meantime to keep this dreadful Ponzi scheme rolling.

What a bunch of self-interested criminal idiots. When their almost inevitable World War III comes up, if it hasn’t already in Iraq, Iran, Afghanistan, and Pakistan, I want all of these cretins placed in the front line, hopefully without body armour. We will then see if they think that this endless reviving of their socialist economic corpse has been worth it.
Posted by Jack Maturin at 11:16 am No comments: 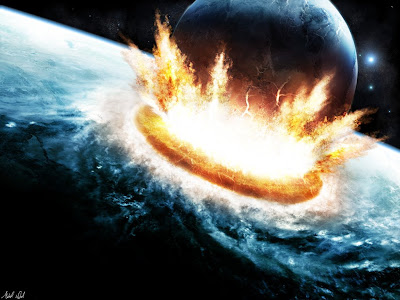 It's been a few hectic months in the life of yours truly, but this week has been unbelievable. What can I say? Nothing more, for the moment, other than I recommend that you keep checking in with LewRockwell.com, the font of all reason.

In the meantime, does anyone out there run a burger bar? Would you like a new burger flipper? I have my own golden spatula. And my own collection of Sponge Bob DVDs.

And if anyone else is reading, has anyone ever appeared more like a gangster than the preposterous Gordon Brown, with his cant about removing the criminality behind the western financial system? As Eric Daniels, my new personal hero, said, the whole fault of this lies with the central banks. And their masters in Washington and Downing Street.

And if the rest of us don't wake up and realise this, we are heading towards hyperinflation, national socialism, and World War III. We Austrians must stand up and state the truth of this for what it is. This is all entirely the fault of the socialist gangster politicians and the state-educated idiots who support them. The solution will be the removal of these fools and all of the associated organs of their moronic criminal empires.

I'm doing what I can, in my limited and tiny sphere of influence. Are you?
Posted by Jack Maturin at 10:35 pm 2 comments: