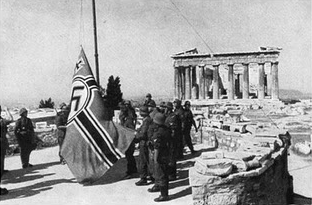 The council of EU finance ministers said Athens must comply with austerity demands by March 16 or lose control over its own tax and spend policies altogether. It if fails to do so, the EU will itself impose cuts under the draconian Article 126.9 of the Lisbon Treaty in what would amount to economic suzerainty.

This is all going to end horribly. Next, we'll have German soldiers on the streets of Athens shooting live ammunition at Greek insurgents.

Will Britain be next for amalgamation into the thousand-year Fourth Reich, when our own massive deficit comes under scrutiny, once the Greek debt has finally blown up?

Oh, it's all happening today.

Still, at least Manchester United are doing well in the European Cup.
Posted by Jack Maturin at 8:59 am