Gordon Brown: I should have been PM not Tony Blair 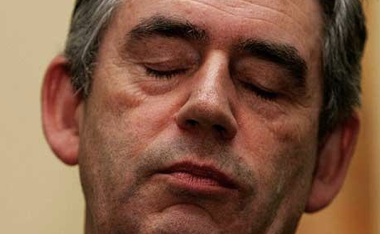 Well, you've got to hand it to him, despite an appalling mendacious charmless record of unmatched blinding arrogant incompetence (as detailed by Jeff Randall); the evil useless swindling contemptible Stalinist freedom-hating one-eyed Scottish knuckle-headed idiot can still beggar belief with his unbelievably self-righteous hubristic conceited and distorted opinion of himself, despite his being universally loathed by virtually everyone else in Britain except his earth-dwelling wife and presumably by his heaven-dwelling mother.

What a pompous ... and I use the word advisedly ... bastard.

Now sod off back to Scotland, Gordon, and don't come back again. Ever.

You won't be missed. Though your blighting bullying record of penury-inducing ineptitude will never be forgotten as a watch-word for utter mindless bovine stupidity.
Posted by Jack Maturin at 2:51 pm