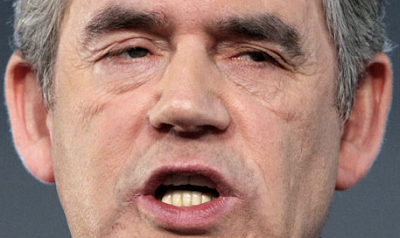 Who would'a thunk it? Gordon Brown, apparently, is still up to his old bullying tricks and several members of the 10 Downing Street staff have recently contacted a National Bully helpline to complain about him and to seek counselling.

I'm shocked, I tell you, shocked, that there's bullying going on in a Gordon Brown government.

Seriously though, if this was anyone other than Gordon Brown (say, Richard Branson bullying his Notting Hill Virgin staff), then the entire Nanny State book of hate crimes and predatory fines would already have been thrown at him, possibly by Gordon Brown himself, or more likely by that dreadful harpie, Harriet Harperson (who is currently defending Brown's indefensible behaviour). This alternative 'evil running dog capitalist' would possibly be under arrest or even thrown into jail, certainly made to undergo 'anger-management treatment' in a state penitentiary, as well as being forced to eat humiliation pie on national television. God forbid if any of these people this rotten cowardly man bullied were women, black, disabled, muslim, or Welsh (or knowing government tick-box employment practices, all five at once).

But because it's that Stalinist rat Brown, the real PM, Mandy "Who's a Pretty Boy?" Mandelson, flaps around on a Blitzkrieg TV studio tour and tells yet more blatant lies about Brown being 'emotional' rather than his obviously being a repulsive obnoxious bully, prone to fits of mental breakdown and physical abuse of taxpayer assets, chucking our phones about and damaging our furniture.

At least when Alex Ferguson chuck teacups around tiled dressing rooms, he does it on Manchester United's tab, and one suspects that Ferguson's 'rages' are really coolly manufactured affairs, designed to provoke players into maximum response, rather than the childish mentally disabled spats that we all know the psychologically-flawed Brown is prone to.

But how did he ever become Prime Minister? John Major, for all his faults, is a real smoothie when it comes to having a microphone shoved under his nose, just as Blair was after him. What is it about the Marxoid wretches in the modern Labour Party, as well as the feeble wimps in the government-licensed media, that led them to all fear this man so much, to allow him to become this horrible brow-beating Marxoid idiot in charge of wrecking all of our lives in a misguided application of a perverted form of Ricardianism which was discredited well before the end of the first half of the 19th century?

The great Eugen von Böhm-Bawerk himself completely destroyed all of Marx's pathetic economic theories in 1896 and yet Brown is still propagating this fantastical rubbish 114 years later, and yet nobody in the Westminster bubble has enough nerve or cojones to challenge this revolting ugly man because virtually the entire economics profession has been captured by Marx, and his great student Keynes (who Hayek thoroughly destroyed too, just for good measure).

But the saddest thing about this entire story is the need for all of these Downing Street staff to contact a charity bullying helpline. You would have hoped that the 'nerve centre' of the British government would have employed people with a bit more spunk in their spines, with the ability to tell Brown just where to get off, where to stick the job in Downing Street, or even to chuck the phones back at him, though his alleged assault on a female secretary is despicable and ought to lead to a court case against him rather than to an anonymous call to a helpline.

It appears the 'Bunker Mentality' really does seem to ring down through the ages, as socialist 'Men of Passion' push all around them to their mutual destruction, unconsciously terrifying everyone with their energy, conviction, and anger, despite everyone consciously knowing that they are idiots.

I no longer take part in elections, because to do so legitimises the state. However, having said that, it really will be a relief when we see the back of this appalling man in 73 days' time, as no doubt once again he will leave it to the absolute last minute before going to the country, to prove to us once again what a coward he is.

(Some rude words)
Posted by Jack Maturin at 8:51 am