It's official – stagflation is back, albeit not yet à la 1970s

High inflation, no growth and rising unemployment – they used to call that stagflation didn’t they?

Poor Jeremy Warner is still stuck in the Keynesian mind-warp that deflation is an evil thing, despite its virtual continual existence from 1815 to 1914 which made the US and the UK the richest and most powerful countries in the world, but he is still pretty good on the rest in his Labourgraph piece.

Check out the graph he has on the article, which marks out the Bank of England's initial inflation, its retrenchment because of a fear of losing control, which then brought on the credit crunch, which caused them to inflate again even more spectacularly, which is heading us towards an even bigger bust when they start retrenching again. Or hyperinflation, if they don't: 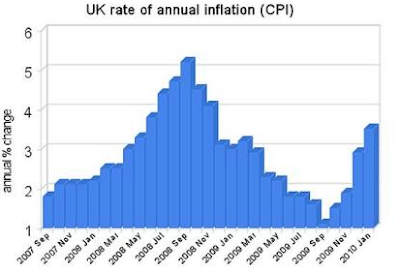 Welcome to the monkey house.
Posted by Jack Maturin at 8:20 am