An Investor's Introduction to Austrian Economics 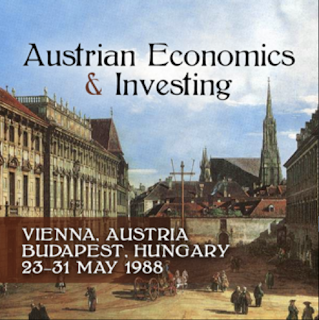 I think I may have uncovered a particularly scintillating diamond in the treasure trove of myriad jewels on the Mises Institute media site. Starring Uncle Murray, of course, displaying his usual multi-decade prescience, he discusses the whole sweep of Austrian economics in about 40 minutes, with particular relevance towards long-term investment.

Magnificent, and just what you need if you're riding a static bicycle in the gym on a Sunday morning.

Delivering this speech in Vienna itself, the original home of Austrian economics, must have been a particular treat for The Maestro:

There's a good written summary of the piece, here, which I have reproduced below:

1) Austrian Economics focuses on entrepreneurs
2) Entrepreneurs knows more about their industries than economists
3) All government intervention is counterproductive
4) Increases in money supply cause price increases, overinvestment in capital goods, and other malinvestments
5) Any boom resulting from increases in the money supply will result in eventual bust
6) Any attempt to avert the bust phase following an artificial boom will prolong and increase the scope of the bust, though may temporarily appear to work
7) Psychological factors are wrongly left out of most economic forecasting
8) The market does not efficiently discount everything perfectly at all times
9) Financial markets do though serve important functions
10) Large increases in the creation of new money (out of thin air) occur especially during war time when government needs the new money to finance war operations - the effects of these increases of new money are then blamed by government on the war
Posted by Jack Maturin at 11:57 am