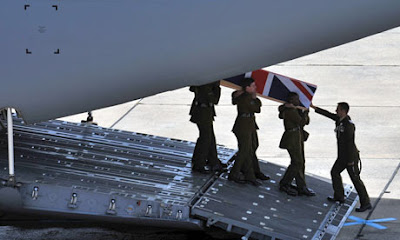 And so the parade of coffins continues.

I have absolutely no idea.

And when the British Army returns to these shores with its tail between its legs, with hundreds of dead squaddies and thousands of badly maimed and injured to its name, and the Taliban then take over Afghanistan again about three months later, I'll still have no idea why.

Does the British Army even know why it's in Afghanistan? Does anybody?

It's time to get out. It was nine years ago when we fell into this mess. Yes folks, that's three years longer than the entire second world war. And still nobody has any idea why we're there, what we're trying to do there, and when the slaughter of British soldiers and of innocent Afghanis will end.
Posted by Jack Maturin at 9:20 pm