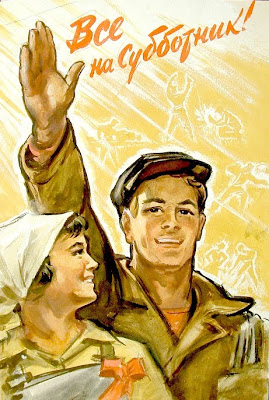 The preposterous George Osborne, apparently the shadow chancellor for the once great Conservative Party, recently marked a new low for even him by trying to shore up the public sector vote by promising to introduce 'worker co-operatives' for government agents in places such as state schools and state hospitals.

Straight from the Lenin propaganda play-book for increasing the power of the "Workers' Soviets", Osborne has rightly annoyed the Marxists in the UK's Labour Party by stealing their own half-baked ideas on such "co-operatives".

As Professor Hoppe has demonstrated time and time again, the major flaw of democracy is that the only hope for political parties to gain political power is to shower 51% of the electorate with pelf stolen from the other 49%.

The problem is not that David Cameron and George Osborne are evil people (though this could easily be debated), it is that they must appeal to the crooks and the parasites that make up the government agent class to have any hope of reaching Westminster as the drivers of the train set.

Now some may say that the homesteading constantly recommended by AngloAustria is the same as introducing "Workers' Co-operatives" to state "industries". However, there are many differences, the main ones being:

1. The state will still fund these producer-led bodies through taxation

2. These bodies will enjoy all the coercive monopoly power they currently enjoy

3. There will be no freedom of entry for other individuals and organisations to compete with these new 'co-operatives' on an even playing-field basis

4. The state will still ultimately control and direct these bodies

5. These new bodies will still be entirely producer-led, with tax-funding consumers a long way down the pecking order of producer interests

These workers' soviets policies, as unveiled by Osborne and Cameron, are designed to directly appeal to government agents, particularly the hard core who would immediately be sacked if someone like me ever had our way. What these policies amount to is a charter for government agents to have an even more feather-bedded existence, if that is possible. Where in this country there is still a modicum of consumer interest, with headteachers, for instance, occasionally sacking really poor teachers, whatever is left of this will go. Headteachers who dare contemplate such action will be sacked forthwith by the soviet councils at schools, whose most vociferous members will almost certainly be the worst teachers in the school. Therefore, to keep their over-large salaries and pensions intact, headteachers will kow-tow to these new workers' soviets, and whatever shred of consumer interest is still left in state schools will be finally devoured by the sloth and ineptitude of the teachers dominating these soviets.

I must say, for a leader and shadow chancellor of the once 'free-market' Conservative Party to espouse the soviet policies of Trotsky, Lenin, and Stalin, is not quite the shock it may once have been, but Margaret Thatcher, if she were dead, would surely be turning in her grave.

With the worst, most incompetent, and most hated government in modern history to still only be a few points behind the Conservative Party in the polls perhaps tells its own story about the competence of Cameron and Osborne to run the next government.

The pair of them truly are a rotten shower of ideologically-inept chancers.

Maturin Towers prediction for the next election? Conservatives to shade victory in a hung parliament, with Labour and the Liberals then getting together to form a joint government. Brown to resign to be replaced as leader by some apparatchik. The real prime minister to continue being Mandelson. Not that it actually matters, of course, because there is so little difference between the three main political parties in this country, and so little will change dependent on the outcome of the election, that I'll be more interested in the sports results on that day, rather than on who gets to kiss the Queen's hand.

Manchester United for the European Cup, anyone?

Is Bonson Jorris reading? Come on Bonson, challenge Cameron for the leadership, if you've got any spunk left, and bring back the Austrian-inspired legacy of Her Blessedness. Make Daniel Hannan Chancellor, while you're at it, and you might actually start making some inroads into Leviathan before it consumes you at the first hurdle.
Posted by Jack Maturin at 4:31 pm

Is Bonson Jorris reading? Come on Bonson, challenge Cameron for the leadership, if you've got any spunk left, and bring back the Austrian-inspired legacy of Her Blessedness. Make Daniel Hannan Chancellor, while you're at it, and you might actually start making some inroads into Leviathan before it consumes you at the first hurdle.

others? Bleh, can't think of any other Tories that are worth a damn. Anyway the big jobs all covered above.

If only we had another Maggie-esque character... else we could look to the Duke if he isn't elected in Connecticut!

That's a good start. We wouldn't need any more than five. We can sack all of the rest, and all of their departments, as the task for day one.

After that, we'd really ramp up the firings and the cost savings! ;-)