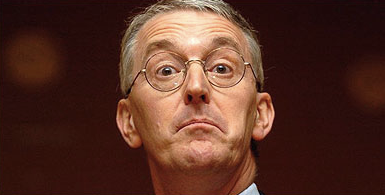 Comrade Hilary Benn, Raving Trotskyite Lunatic
There are some pretty stupid UK government ministers, but perhaps the stupidest is the ravingly insane Comrade Hilary Benn, son of privilege and secretary of state for environment, food and rural affairs.

In his diatribe against British farmers there is no mention of quantitative easing, the crowding out effects of government borrowing which is preventing private industrial investment, nor the cornucopia of government regulations strangling everyone in this country from producing more, particularly farmers, or even the complex web of taxation and welfare which dominate the human actions of all farmers.

But even given these constraints, does Comrade Benn actually think farmers sit around all day waiting to be instructed by deities in Whitehall to produce as much as is economically efficient to make the best life for themselves as they so judge it? Perhaps we would be better off if we introduced Stalinesque collective farms, which worked so well in Russia, to force them to work harder? Comrade Benn is probably already contemplating it. He studied Russian and Eastern Europe at University, so he must know how well his fellow Commissars did in the Soviet Union, whom he so obviously apes to mimic.

Just check out this quote from this Über-Being, who knows so much more about farming than any mere farmer ever could:

Mr Benn said that he took action last year to prevent the pig farming industry from collapsing.
"You told me that if something wasn't done – and fast – then pretty soon England might not have a pig producing industry left," he said.
The Government's Pig Meat Supply Chain Task Force, which was set up in response to the problems, will "stop that nonsense from happening again", Mr Benn said.

Yes folks, you read that right. Here in Britain we now enjoy the benefits of being served by the 'Pig Meat Supply Chain Task Force'. Oh, I don't know how I could sleep without it, because the free market in pig farming couldn't possibly survive without government intervention. Indeed, it must have been a miracle how pig farming originated circa 30,000 years ago and made it all the way up to nearly the present day without the blinding wisdom of Comrade Benn to invigilate it.

Yes, 17 of the great and the good, plus administration staff, who man this quango, can now daily fill another government trough of tax slops to slurp their way through the pork to their hearts' content. The 'Pig Meat Supply Chain Task Force' must be the most appropriately named tax-feeding government body in England.

To me, Comrade Benn is actually the very picture of a raving 'Animal Farm' type socialist, reminding me most of either Snowball or Squealer, though I think Snowball gets the nod because of the Trotsky-style glasses Benn likes to wear.

Like Snowy and Squealer, Comrade Benn also loves living within the very heart of establishment privilege, in our socialist workers' paradise. Check out the entry on this tool, on Wikipedia:

Hilary Benn is a fourth generation MP as the second son of former Labour Cabinet Minister Tony Benn and the educationalist Caroline Benn. He attended Norland Place School, Westminster Under School, Holland Park School and University of Sussex where he graduated in Russian and East European Studies.

Now check out those schools:

=> Norland Place School is a coeducational independent school for boys aged 4–8 and girls aged 4–11. It is situated in the Holland Park area of London, and was founded in 1876 by Miss Emily Lord.

=> Westminster Under School is a private preparatory school for boys aged 7 to 13 and is attached to Westminster School in London.

And then, just to make things seem a little less privileged, his father, the infamous pipe-smoking Marxist Tony Benn, covered up the tracks a little by missing out Westminster School, plumping for a socialist finishing school, instead:

=> Holland Park School, in the Royal Borough of Kensington and Chelsea, was opened in London, UK, in 1958. It became the flagship for comprehensive education, and in its heyday had over 2000 in the student body. It became known as the "socialist Eton", and a number of high-profile socialists sent their children to Holland Park School, adding to its reputation as a left wing institution.

Yes, we in England really are ruled over by lunatics (in case you doubted it). As a former hard-core socialist myself, I met his father several times during my mis-spent youth, especially during the miners' strike, and even idolised him, usually hardly daring to speak to him. When the Socialist Scales of Damascus slowly fell from my eyes and I gradually saw the father for what he truly was, I had thought that there could be no-one madder in government.

That was until his son appeared on the scene, who really is the complete and utter nut-job; I suppose this was inevitable after his father gave him a girl's name.

Still, at least the father, the former 2nd Viscount Stansgate, is now president of the Stop the War Coalition, and he does have a sense of humour (as he proved with the naming of his son) so he can't be all bad. However, I'm afraid I cannot cut any similar slack for Hilary, who sits in a Cabinet which wants to spend umpteen billions of other people's money upgrading the Trident nuclear missile submarines, so that the American state can later tell the Royal Navy when to launch these weapons of mass destruction (because God has ordained that only white europeans and their descendants can possess such weapons).

So much for principle then, Hilary, when weighed against power and privilege.
Posted by Jack Maturin at 11:33 am

I remember having an exchange with old Tony a few years back in my more formative days when I was starting to ask serious questions about the left-wing people I was spending time with.

It was at Glastonbury in the "leftfield" tent and he was prattling on about what a success story South Africa was. I piped up and pointed out that (at the time) many thousands of people were without water and power. His response - you guessed it - its all capitalism's fault. I'd already got sick of hearing that response by that point, and so my slide continued....

We didn't meet on the picket line at Rossington Colliery did we? :-)

"It ain't no 'bog-standard' comprehensive".

Additionally, I understand, (though, in fairness (!), I have been unable to verify this) that Comrade Hilary also had the good fortune to benefit from a privately employed tutor or two during the formative years as well. These Socialists don't do things by halves in their search for equality you know!!

You have to admit it's amazing though: such folk just never seem capable of halting their control freakery long enough to question just where the smell that invariably follows them around actually comes from.

You really would think that the stench emanating from a hundred years plus of rotting corpses around the globe as a consequence of State sponsored famines, wars, domestic terrors and oppressions etc might offer cause for a Socialist to think. Add in the lashings of misery resulting from central 'planning' and the subsequent forced collectivism that serves only to reduce subject populations to the status of slaves for those that survive, and one would surely expect, at the very least, a cursory glance sideways. But no - it’s always more of the same, but harder!!

For God’s sake, will someone enlighten me. At what juncture exactly does your average leftie scratch his forehead and ponder the notion that 'just perhaps this idea doesn't actually work' - assuming that some kind of just, peaceful, co-existence is actually one of its aims of course.

Socialism will only work when all the capitalists have been wiped out and we have an all-powerful world government. Until then, the jury's out, and we must keep trying to achieve both goals just so we can test the theory.

Unfortunately, if we are wrong, and the all-powerful world government turns out to be an evil horror, then we're stuffed. Because they'll be nowhere to run to and no means of defending yourself.

But I think it's worth the risk so that we can finally tell if socialism actually works.