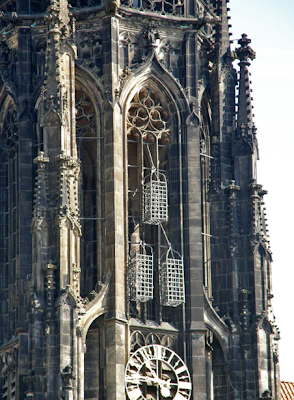 If you look carefully at the steeple of St Lambert's, in Münster, Germany, you can still see the cages in which were imprisoned the reign-of-terror anabaptists who subjected the city to a terrorist religious egalitarian communist state, in 1533
You might be under the impression that communism sprang fully-formed from the brow of Karl Marx. However, Karl Marx himself was simply the product of a long line of apocalyptic millennial thought springing from the growth of state-worshipping protestantism from Martin Luther onwards, in central European culture.

The only innovations of Marx were to take this religious millennialism and to add to it the modified economics of David Ricardo and to replace God with the state. (That's the short version. To read the long version, try Uncle Murray's The History of Economic Thought, Volume I, particularly Chapter 5, with the section on Münster beginning on page 150.)

Communist religious millennialism, awaiting a paradise on Earth, was to be ushered in by a returning Messiah. It was particularly prevalent in the city of Münster, in north western Germany, in the 1530s, under a theocratic anabaptist communist state seeking a 'New Jerusalem'.

Uncle Murray describes this bizarre reign-of-terror madness which overtook the Bishopric of Münster at that time, where even 'quarrelling' was punishable by the death sentence, as enforced by the church, and where polygamy became compulsory:

Fortunately for the people of Münster, they managed to overthrow the anabaptist ministers terrorising their lives and then caged their corpses for all to see, for the rest of time. You can still see these cages, today, in the photograph above.

We saw another glimpse of this insane 'millennialism' with the Christian socialist regime of Tony Blair, arising to power in 1997 and basing much of his rhetoric on the ancient millennial madness of Münster, constantly quoting how wonderful things would be in the year 2,000 if he was elected to create another 'New Jerusalem'. We fell for this flannel, and have spent the past thirteen years regretting it.

Let us never fall for this nonsense again.

HT to Paul
Posted by Jack Maturin at 4:07 pm