Where women glow and men plunder

What a rotten country England has become under socialism. Our bastion of Anglo-Saxon freedom now consists of a land in which prole children have their schools selected for them by the RAND() function in Excel spreadsheets, via a repulsive series of lotteries; these children then have their lunchboxes checked by fascist teachers, to ensure the state's future tax slaves consume nothing but government-approved foods (even though Gordon Brown is carrying about four stone too many); and the poor mites are then subjected to an unrelenting wave of environmentalism and other assorted politically correct nonsense, with the overall message continuously drummed into them that “Government is Always Good. You Must Obey the Government. Work Hard. Then Pay your Taxes to the Government. Anyone Avoiding Taxes is Evil.” 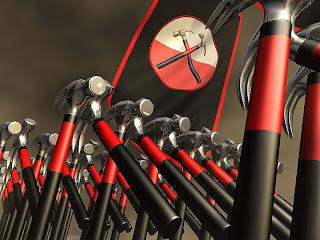 But where is better? England may be a tarnished emerald jewel in a poisoned sapphire sea, but is anywhere else better in the Anglosphere? America is a cesspit of onrushing fascism where black-shirted Gestapo regularly execute resistant proles on the street, with Tasers. Canadistan is a land where it is a mortal sin for anyone to pay anyone else to treat them for any kind of conceived ill (which is only bearable because you can drive 100 miles to the US, in most cases, if you desperately need decent medical care).

Does this make New Zealand beckon, as it has with so many of the Galt-Gulch-Seeking Randites? Perhaps. (Though the Land of Middle-Earth does seem to have been infected with many pockets of deep-rooted socialism.)

But I’ll get my toes wet first, before I dive right I in, and start with Australia. For the next two weeks, therefore, AngloAustria will be coming to you from downtown Sydney. I’ve had my shower in Bangkok; I’m wearing a ridiculous Pyjama top from Qantas (replacing my horribly grubby Von Mises polo shirt), and in about 12 hours time I shall be stepping down into the land from Down Under.

Let us see what we shall see. To be objective, I have even relented from bringing with me any England rugby shirts. So in semi-disguise, I shall say only this: G’Day, Cobber.
Posted by Jack Maturin at 12:10 pm

Those NZ randites you mentioned? Well I get the subtle feeling that one of them in particular doesn't like your man...

and he even has a go at Uncle Murray:
http://pc.blogspot.com/2008/01/who-wrote-ron-paul-material.html

Oh dear, your NZ Randite friend really does seem to have his objective knickers in a twist, with his feeble misrepresentation of Paul, direct from the the Beltway Libertarian Cato Institute propaganda box. What a shame someone capable of linking so many long sentences together has developed such a rancid, sorry Randite, way of thinking. He must be smoking a very rational brand of cigarette. In the meantime, when I consider whether to follow his philosophy or that of Uncle Murray, I shall continue to judge this on who has written the greater collection of magnificent works of liberty. I might even go so far as declaring that George Reisman's claim as greatest living Randite is still under very little threat. Appallingly little threat. What a terrible shame it all went so wrong for the Randites. Why did she have to do before she had told them all what to think, forever? (With the noble exception of Mr Reisman.)

In the meantime, Sydney's just great. A tad warm, mayhap, for an Englishman fresh off the boat from England in January, but what the heck. The Cockle Bay waterfront is particularly splendid. And the view from my office on the 32nd floor of the Grosvenor building, overlooking the bridge and the opera house, really does have to be seen to be believed. Marvellous.

"What a terrible shame it all went so wrong for the Randites."
Indeed, although I'm sure my Randite friend would disagree that there is anything wrong with it at all - tsk, such irrationality will simply not be tolerated.

I took a look at his link for the definition of libertarianism and liberty in the vain hope that it might shed some light on his creed, but, other than effectively asserting that only fellow Randites can truly want liberty and be called 'libertarians', it somewhat disappointingly rehashed the old contradiction that no Randite has ever been able to resolve for me:

"and to bar the initiation of physical force, governments are a necessity -- agencies, that is, that hold a monopoly on physical force in a given area"

To hold such a monopoly, in fact to even exist under such a definition, is in itself the very act of 'initiation of force' that such an agency is supposed to prevent. Logically, game over. There are practical arguments that many Randites I've argued with have thrown at me, some maybe even worthy of some thought but "pro-state libertarian" must surely rank up there with 'Government Intelligence" as an egregious oxymoron. Although given that their definition of 'bar the initiation of physical force' involves actively going out into the world to kick the bejasus out of anything that moves you can see why they don't see a problem with it all.

Anyway - glad you're enjoying Sydney. Is it just a holiday or have you, like me, run screaming from the encroaching socialism in the Motherland (in my case only to find more at the other end of the world). Sigh. C'est la vie.

Like most libertarians I went through a Randite phase, immediately after reading "Atlas Shrugged", and got all of her books. I had the first inkling there was a problem when she was praising the Apollo manned missions to the Moon. I mean, Apollo grew DIRECTLY from the V2 WMD program of the Nazis, bypassing the ICBMs of nuclear armageddon developed by the Soviets and the Americans in the 1960s. The "Race for the Moon" was itself a statist waste of resources on an enormous front, so when I realised Rand was a supporter of this horrible waste of taxpayers money, the scales fell a little from my eyes. Since, then, especially after watching "Mozart was a Red", I've realised the full horror of the Randian neo-Communoid world view, just as Rothbard did when he awoke from the indoctrination program he allowed himself to be put through. With the aforementioned exception of Professor Reisman, nothing any modern Randite has to say is worth listening to, until one of them writes the sequel to "Atlas Shrugged" which explains how John Galt puts the world straight, just as the previous book closes. Rand herself was incapable of writing it, despite 20 good years of writing left in her after the conclusion. And none of her subsequent acolytes dares even try. This is because I think she finally realised she was wrong but was too proud to admit it, therefore was unable to write the necessary sequel ("Atlas Stands" perhaps?). Anyhow, any Randites reading this, please let us know when the sequel is out, and then we can revisit the situation.

Sydney is business, alas. Just two weeks down under, pimping for filthy lucre, then back to Blighty. Got some great photos. Once I've managed to bluetooth them off my phone I'll post a report. Hunter Valley Gewurztraminer and Shiraz both great. Wentworth Falls fantastic. Saw a Wombat today, for the first time. Marvellous.

Just one problem. Is it me or does Sydney seem to be mutating into Los Angeles? Horrors. Oh well. The death of one empire, and the rebirth of another. I met an American today and he said that apart from driving on the left, he felt he was still in southern california. Terrible, Australia.

It'll all end in tears.

At least thought they still DO drive on the left and STILL have the Queen's head on the money. God Bless 'Er.

How much longer though, eh? 51st state, anyone?