The Long Haul Candidate Gets Second

Oh dear. In a remarkable night, where I bit my nails off down to the metacarpal bones while watching the Paul-McWar close-head race, Our Man finally wrested second place off the Civilian Bomber in the Nevada caucuses, just beating McWar to the line. 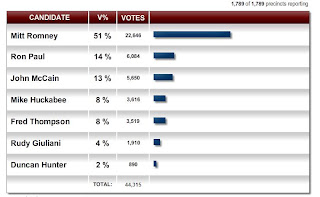 So what could Fox News do? It was a tricky situation. They could either go with the official results, in which I never saw McWar once get ahead of the Good Doctor, despite refreshing my browser every thirty seconds for six hours, or they could make some stuff up to avoid bearing the ignominy of having to give Our Man any decent coverage. Well, I am sure you can guess the rest. They pumped up McWar's figures a bit, to get him ahead of Dr. Paul, and then used a Huckabee graphic instead of the Good Doctor to enlighten us on the situation in the tail of the race. How thoughtful of them! As I speculated earlier, I thought something like this might happen with perhaps the BBC here in England, but for Fox News to be forced into this excruciating position is simply fabulous. Oh Rupert, how I laughed, perhaps not as loudly as when Aragorn started singing in the Return of the King, but tears were close. Splendid! 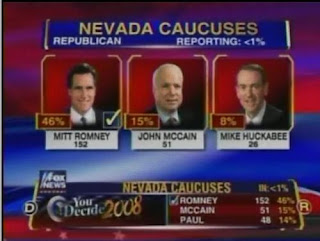