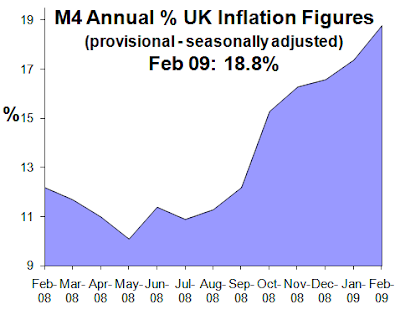 Before quantitative easing officially kicked off in March, the Bank of England actually had a fairly quiet month in February.

They're still doing quite well, however. Mervyn King did still manage to raise the inflation rate to a provisional rate of 18.8% from a confirmed rate of 17.4%. So his people over there are still working night and day, to destroy the value of the pound in your pocket.

It's for your own good, you know. So I want no complaining.

The new provisional inflation rate of 18.8% combined with a Bank of England base rate of 0.5% also now gives us a real interest rate of MINUS 18.21%.

So what will happen to the March figures, next month, when they are released on April 19th? Will the quantitative easing introduced this month, combined with the usual backhanded counterfeiting, do the trick and make my 20%+ prediction come true?

Well, if you look at the graph above, it certainly seems to be the trend. And although banks may still be hoarding this new cash from out of thin air, some of it is bound to leak out as traders buy up government bonds so they can flip them to the Bank of England for a handy profit. So I'll stick on 20%, for the moment, because the entire British government is doing its damnedest to get the banks to release this brand new paper cash.

With increasing government control of the banking industry, this may be the month where it finally gets its wish.

Though having said that, the British government is always useless at everything it does, except killing people, so maybe they won't even be able to get this new money out into the open to increase the M4 figure, despite their direct control of RBS, HBOS, and Lloyds, and their practical control of all the rest.

Let us wait and see.

The provisional figures for March will be available here on the 19th of April, at 9:30am.

This is bad news. If developed countries, like UK, have such a big inflation rate, how could developing countries, in which financial mechanism don't work very well, handle this crisis?

Still, it's understandable that developed countries are having a hard time as well, the transactions on these markets are much more numerous.

I saw your website and it is quite impressive and a great idea to earn Dollars daily.

Hey ! Genuinely it’s really possible to earn money online; I really felt that this website is quite impressive and a great idea to earn hundred’s of Dollars daily.

Online cash loans are becoming the new wave of the future and more and more people are applying if only to establish themselves with one of these services in case of an emergency. So if you find yourself short of cash and need that "little extra" consider an online cash loan.

wow nice blog and thank you dear editor for your information
and everybody know about trading from here
www.besttradingguide.com