Murray Rothbard would have been proud 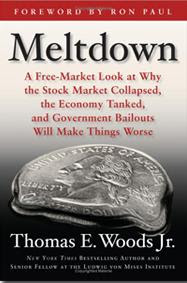 We can trace the direct flow of hard-core Misesian Austrianism through an intellectual river composed of a handful of giants.

Starting with Carl Menger, a spring up in the mountains, we work downhill through the bubbling mountain stream of Eugen von Boehm-Bawerk, the waterfall-laden river of Ludwig von Mises, and the all-encompassing curves of Murray Newton Rothbard, deep amongst the valley meadows.

A few other rivers come in, such as Henry Hazlitt, and a few other streams depart, such as F.A.Hayek, but we can still see the general flow, which feeds upon the initial rainfall of the Spanish Scholastics, and the great pivotal figures of Turgot, Say, Bastiat, Nock, and Aristotle.

But who is next in this mighty river? Thankfully, I think we’ve reached the point where the whole weight of economic truth is no longer riding upon the narrow shoulders of a single man or woman. We have now hopefully reached a delta, where there should never again be a single person who has to bear the difficult cross of being ‘The Austrian’.

But some are closer to the central outflow of this delta than others; I think with ‘Meltdown’, Tom Woods has finally joined this central outflow. In many ways, Meltdown reminds me of the writing style of Uncle Murray himself; precise, concise, and acidic in its condemnation of the mistakes of the state.

Arguably the most important Austrian book since ‘Man, Economy, and State’, if only on the basis of its timing, it is essential reading if you are to defend the free market from the incessant attacks of the numskull legions of socialists.

There will shortly be a slew of Socialist/Keynesian books in this vein, written by all the enemies of capitalism, denigrating capitalism and blaming it for this crisis, whereas all Austrians know that this current economic crisis is entirely due to central bank and government manipulation of the world’s money supply, for short-term political benefit. It is to Mr Woods’ great credit that he has got this book out before all of them, to muddy their waters, hopefully to the point where their writings are made irrelevant to serious scholars.

The terrible shame of the 1930s depression was that there were only two men alive who knew what was happening, Mises and Hayek, who were both peripheral figures barely able to make themselves heard outside of the German-speaking world. (Largely due to the rise in prominence of the devil incarnate himself, John Maynard Keynes.)

With Meltdown, plus the Ron Paul movement, plus the entire loosely-connected world of Austrianism, which sustains such fellow travellers as Jim Rogers and Peter Schiff, this shut-out of correct economic thinking will not be allowed to happen again. Yes, obviously, a lot of people will be sticking their fingers in their ears and shouting ‘la-la-la’ at the tops of their voices, because they don’t want to hear the Austrian message that governments should just leave well alone, but they will be choosing to do this. It will not be because they never heard anything in the first place.

That is why, as an aspiring Austrian, you need to buy this book, to read it, and then to distribute its ideas to everyone you know. For it contains an entire distillation of the core components of Austrian theory, plus a narrative describing how the foolish governments of the world got us into this mess by breaking the rules of sound economic thinking.

For instance, scientists know how the cycles of the lunar-driven tides occur, but non-Austrian economists still have no real explanation for how the business cycle occurs. The best they can come up with is ‘animal spirits’, or ‘a failure of greed’, or some such other silly nonsense, without explaining why these animal spirits seem to come together only every ten years or so, or why greed magically disappears for nine years out of ten.

Woods explains the Austrian Business Cycle Theory in very clear fashion, as well as the Austrian theory of money and credit, and how the world’s governments fed the central banking bubble in the post dot-com period. He also blasts apart the myths of the 1930s depression, why bailouts will extend this current depression, and what we should really be doing about it all.

He does this with a certain amount of dry humour, without lessening the seriousness of his words; again, this is very much in the style of Uncle Murray, who took Woods very much under his wing when he was still with us.

So why do you want to buy this book?

Because if you’ve found yourself in a pub recently, around closing time, and the bone-headed socialist you’re with is still banging on about how the current mess is all the ‘fault’ of capitalism, if you buy this book, you will be armed with more than enough ammunition to swat this annoying insect. Obviously, it won’t do the actual socialist any good, because very few of these sad unfortunates ever recover from their terrible affliction, but at least the other people listening in will get a different viewpoint for a change, and we can bring the arguments of the Keynesians to a standstill and then get them on the back foot for the long retreat they need to endure.

That is the beauty of this book. It is ammunition to defend freedom. It is a first step on the long road back to freedom. I cannot recommend it highly enough.
Posted by Jack Maturin at 5:33 pm

not an economist said...

A good, interesting review of this book by Karen De Costner is available at this link:

I have read some of the arguments before -e.g., role of the FED in reducing interest rates after 2001, Fannie Mae/Freddie Mac and the Commuity Reinvestment Act - but its still a good, illuminating article, esp if you can't afford to buy the book just yet (and probably never in my case what with the hyperinflation that is about to come our way thanks to the Scotch Twat!!!).

Logo Designing is a creative process which requisite collaborative attempt of both the designer and the customer. This joint attempt will produce a brand which is not only eye catching but can also achieve the growth of business in a affirmative way. I must share that you have all these qualities. Cheerz!