What's the REAL inflation rate in the UK?

This is tricky. I would prefer a value such as the TMS (True Money Supply), as calculated by Mises.org to reflect the true monetary inflation rate in the United States. However, there is no such thing available over here in the UK so I will use M4, the 'traditional' way of measuring 'broad' money. OK, so it ain't perfect, but at least it's a whole truck load of gin better than the heavily massaged CPI figures.

So where has M4 been going recently? Go on. Guess.

I'm going to use the simple non-seasonally-adjusted M4 figure, to give us something nice and straightforward which we can get a long-term handle on, rather than any of the Bank of England's many other petty-fogging obfuscations. 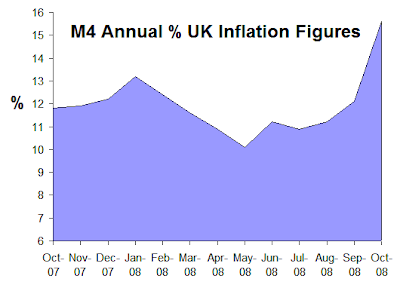 Notice the steep rise in the inflation rate in October, to deliver an annual M4 inflation rate of 15.6%. This is the harbinger of much worse to come as the artificially-low Bank of England base rate takes effect, and as they start buying up UK Treasury bonds directly from the Debt Management Office, in what they will euphemistically call "quantitative easing" - counterfeiters call this process "a good day in the office".

You may also want to notice that at one point the UK central bank almost managed to get inflation under 10%, squeezing it all the way down to 10.1% in May this year. Such discipline!

But despite this heroic effort, in one year, the Bank of England managed to deliberately create £255 billion more pounds than had existed twelve months earlier, approximately £4,000 pounds for every man, woman, and child, in the country. This is fine work, especially if you want to generate a Weimar-style republic. Expect much worse to come, though even I will admit that increasing the UK monetary base from £1.64 trillion pounds, to £1.9 trillion pounds, is hardly slacking.

I'll try to keep you posted, though as both Guido and Obnoxio have noted, the UK government is beginning to restrict what they want the Bank of England to tell the rest of us, so this may become increasingly difficult.

PS> If you want to drown yourself in a whole myriad of meaningless nonsense, you can check out the M4 figures here. Good luck!
Posted by Jack Maturin at 1:38 pm