Check out the Bank of England's statistical release information from November, for the real UK monetary inflation rate in October (a.k.a. M4): 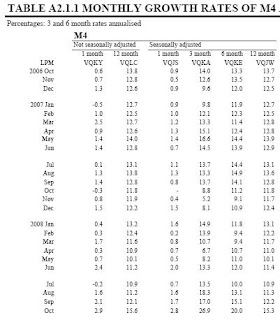 Now check the best figures I can find, released yesterday, covering November itself: 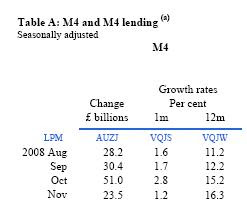 You'll notice that although the latest release is prettier, with a hint of colour, there is a lot less information - a very 'New Labour' arrangement!

Also, there are only 'seasonally adjusted' figures, and no raw figures. I don't know what heuristics they use in the Bank of England to 'seasonally adjust' such figures, but I'll guarantee that whatever they are, they have reduced the unpublished raw M4 figure.

There are several possible reasons behind this. The first is that I have once again been bamboozled by the horrendous statistics presentation pages which are seemingly set out by the Bank of England to create a sea of confusion.

Although this is the most likely reason, there is of course the other 'paranoid delusional' reason that the Bank of England is now releasing less information than previously to cover up its deliberate growth of inflation.

Whatever the case, unlike last month, I am forced to have to give you 'seasonally adjusted' figures, because I simply cannot get hold of the 'real' information. Whatever the case, and no matter how the civil servants in the Bank of England may have obfuscated the information, they cannot hide the fact that M4 has just gone over 16%. Expect this UK inflation figure to grow, as we head down towards zero per cent interest rates: 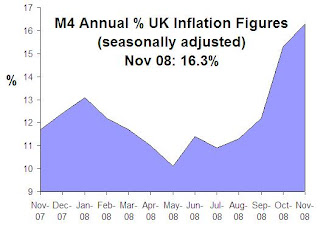