Manifesto for a world revolution 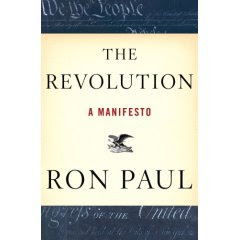 The following piece should have popped up on Amazon.co.uk, as the first UK review for Ron Paul's The Revolution: A Manifesto:

As a Republican presidential candidate, Ron Paul is understandably a man concerned primarily with the United States, rather than with England or the rest of Europe. However, the ideas expressed in his book, The Revolution: A Manifesto, can be globally applied given a preliminary understanding of the original American revolution and the later construction of the US constitution. The world is suffering from a surfeit of statism, posits the Good Doctor; we have exploding financial bubbles, endless wars, dissolving currencies, and diminishing civil liberties, racing like the four horsemen of the apocalypse across the entire world. With astonishing clarity, Ron Paul exposes how these inter-linked beasts are related and how they can be tamed via the use of a simple ingredient the United States once used to believe in; freedom. The Republicrats of America must hate him for exposing their carefully spun fallacies behind central banking, foreign policy, fiat currency, and the welfare/warfare state. So, if you want to understand what is going wrong in the world and how it can get fixed then you must read this book, especially if you want to know what America should do to become the beacon of hope it once used to be, rather than the imperial aggressor it has unfortunately become. Personally speaking as a Rothbardian anarcho-capitalist, and a follower of Professor Hans-Hermann Hoppe, I feel that the Good Doctor places a little too much reliance on the ability of any constitution to restrain any government. However, he has written a beautifully crafted piece of work which it is possible to read in one sitting, despite its comprehensive coverage of the entire remit of western world government. The text will also help you understand the basic tenets of Austrian economics, a political philosophy based upon peace, prosperity, and freedom, which may help you remove any scales of state indoctrination from your eyes, if you feel inflicted with the fuzzy feeling that somebody has been hiding the truth from you, for most of your life, about how governments really work. In brief, I believe this book could help save the world as we know it. I hope it does and I hope this review has done it the truly magnificent justice it deserves. Go Ron Paul.