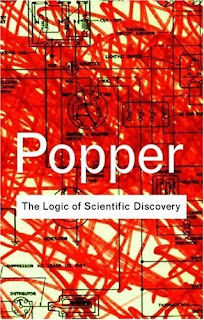 An interesting post over at Choice Cuts discussing some tax-funded eco-scientists; they're claiming that if over the next ten years global temperatures go down, stay the same, or go up, it will definitely be global warming to blame.

So, Sir Karl Popper, God rest your Austrian soul, I hereby challenge you to falsify your way out of that one. Good luck!

UPDATE: I have added the following section to the Wikipedia page on falsifiability. I even tried, despite myself, to be even handed! Let's see how long the piece lasts in an un-shredded state before the eco-worshippers get themselves into a frothy lather about it (thus, of course, proving the point).

The most effective thing you can do to ramp up the fight against climate change is to go and take on a AGW denial propagandist, on their own astroturf.

Well, come on then wadard, stop posing and start tackling. I'm happy to defend my position on global warming, as caused by mankind, in any way you like. What have you got?

In the meantime, if you fancy a REAL challenge, try tackling my climate change mentor, Uncle George Reisman. I think you'll particularly like this one:

ENVIRONMENTALISM IS RECYCLED COMMUNISM AND NAZISM

If that whets your appetite, try these ones on, too:

When you and your army of trolls have worked your way through that lot, let me know, and I can send you some more.