Why the dollar is going to collapse...

Two diagrams cover it all. The first is Ben Bernanke's expansion of the money supply in the last year. Take a look at the extreme right-hand edge of this chart: 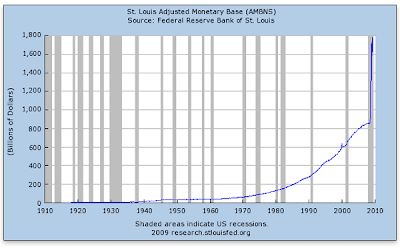 (For more details on that chart, read this.)

But what's going on? If Ben Bernanke truly has doubled the supply of dollars in a single year, then where has all of that paper money gone? Why is the U.S. not reeling from hyperinflation? 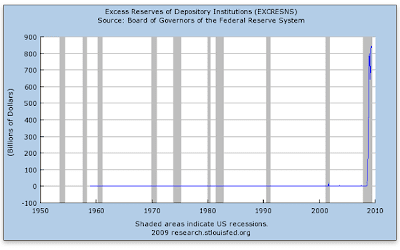 (For more on this chart, read this.)

What this tells us is that there is a veritable tsunami of dollars building up in the Fed, dammed up by Ben Bernanke. But the lake is filling, and Ben's only way of holding the dam is to pour more water into it with zero per cent interest rates.

The dam will collapse, from either weight of water, or the Fed raising interest rates a fraction. The dollars will then come pouring out. The fractional reserve system will multiply each dollar into a myriad of others. There will be one from the following, when this happens:

2). Massive inflation (Hyper Inflation) - if Ben keeps interest rates down to avoid immediate economic collapse. All the debtors, the majority of voters, will be overjoyed. Until they see what hyper inflation does to an economy, after a couple of years.

If you were to force me to put gold money on it, I'd bet on option two. I think Obama and the debtors of America will not have the stomach for option one. Option three is life in the land of the fairies and other Keynesian idiots.

As Bob Murphy says, it's hard to put figures on it, but the U.S. economy will be in the toilet for at least a decade. It's all in the charts.

With the quantitative easing scam here in the U.K., we face a similar if less horrific situation. Let us just thank the Lord that the pound sterling is no longer the world reserve currency, so we have not had so much rope with which to hang ourselves.

Future economic historians will look at these staggering efforts with awe and wonder; they will wonder what the Hell we were thinking.

"Future economic historians will look at these staggering efforts with awe and wonder; they will wonder what the Hell we were thinking.".

No one is Thinking! The Politicians are just trying to cover their asses and the bankers are trying to make as much money out of this as they can, while they can.

No need to wait for the future, everyone I know/see/read/heard/look-at/exists already wonders what the hell they're thinking.

I am not saying inflation should not be a serious concern, however you fail to mention that the Fed changed the rules so they can now pay interest on these reserves. That's a massive change in law and policy and is the Fed's primary answer to articles like this one.

If you read what FRB NY's Dudley said this week, he provides the counter argument:

"Dudley argued that the Fed's large and growing balance sheet is nothing that prevents the Fed from controlling inflation once the economy corrects. 'It is not the case that our expanded balance sheet will inevitably prove inflationary,' he said.

Specifically, Dudley said the Fed's new ability to pay interest on excess reserves is a critical tool it uses to keep banks from lending these reserves and thereby creating new credit and boosting inflation. 'Thus, through the IOER rate (interest on excess reserves), the Federal Reserve can effectively retain control of monetary policy,' he said, noting that the Fed can increase the IOER rate if banks begin to find it more profitable to lend these reserves."

So then you're taking out another mortgage and running up your credit cards to buy gold I presume?

Anon, more debt would be suicide.

Personally, I've made sure that I have plenty of useful productive assets (as opposed to funny money) rather than debt and gold

As your bet seems to be the most likely indeed, this calls for a followup, that would explain (possibly with examples) "what hyper inflation does to an economy, after a couple of years."

By the way, I'd love to be able to quantify "hyper" and "massive" compared to, say, "strong" inflation.

"Could you tickle my bottom while I fuck your wife. Thanks, serf."

I think that just about covers it.

Really great post nice work i love your work and its really helped me in my research.Thanks for sharing