Police kill man for no reason 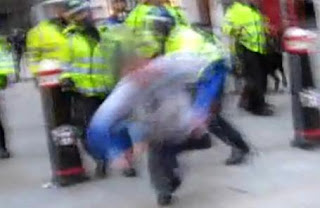 So what do you do in Britain these days if you're walking along the road and some angry British police officers come up behind you?

If you run like hell, they'll shoot you in the head 10 times and then fabricate a story that you acted like a terrorist.

If you turn and confront them, then they'll beat you to the ground and then fabricate a story that you acted like a terrorist.

If you walk slowly away from them, with your hands in your pockets, then they will assault you from behind with batons and then fabricate a story that you acted like a terrorist.

Whichever way you cut it, just make sure that you're never anywhere where there might be some angry policemen about.

Not that Britain is turning into a fascist police state, or anything, where the police can kill anyone at will with absolutely no come back to any of them, at any time, for any reason. No. It's nothing like that, at all.

Thanks Gordon, and all the other 'libertarian socialists' who gave us ZaNuLabour.

NB: Your Maturin Towers correspondent was about 300 yards from this incident, a couple of hours earlier, going about his business. Fortunately for him, although he did come across a lot of riot police, they were all in vans having a breather.
Posted by Jack Maturin at 9:58 pm