The provisional UK inflation figures came out yesterday, covering December 2008. The seasonally-adjusted M4 inflation figure has now risen to 16.6%, over a 12 month period. In December, the Bank of England presided over the creation of £33 billion pounds from out of thin air, or approximately £550 pounds each, for every man, woman, and child, within the United Kingdom; this is a remarkably similar amount to the £37 billion just lost by Gordon Brown on his first failed banking bailout: 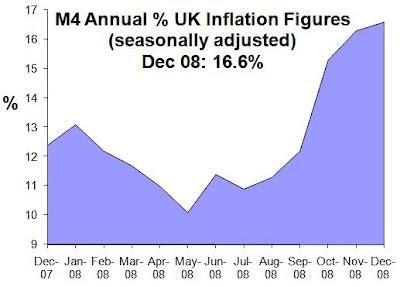 (The non-seasonally adjusted figures for December 2008 will be available here, via the fuller "Bankstats", released on the 30th of January.)

The next provisional release, covering January 2008, should be here on the 19th of February.